THERMOCOAX is committed to develop solutions for new nuclear reactor technologies. We are proud to have been elected as the Mineral Insulated Cable supplier for the ITER project in the frame of  F4E (Fusion For Energy) and ITER international call for tender.

THERMOCOAX will provide Cabling  systems for ITER Vacuum Vessel where harshest conditions are met. We greatly value this contribution to the FUSION reactor technology. 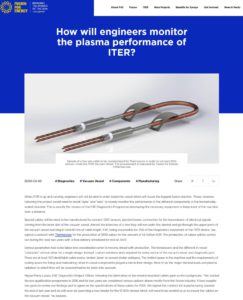 Fusion is a physical principle during which two nuclei combine to generate energy.

For a peaceful application, electricity would be generated through a reactor generating heat, which would then be transferred in a loop to activate a turbine.

There would be numerous advantages of this technology: CO2 free electricity production, minimal waste compared to FISSION reactors, unlimited “raw material” coming from the sea and intrinsic safety. If problems occur, switch off the reactor.

Fusion is the process that occurs in the core of the Sun and stars. When we see light and feel warmth, this is the result of fusion reactions: hydrogen nuclei collide, fuse into heavier helium atoms and release considerable amounts of energy in the process. Fusion is the main source of life in the Universe. To reach an appropriate environmental condition at which the reaction can occur, different vacuum chambers have been developed with Tokamak reactors.

A Tokamak reactor is a vessel which uses a strong magnetic field to contain a plasma and ultimately produce a net energy output. It is shaped like a “donut”.

Tokamak stands for the Russian acronym of toroidal chamber with magnetic coils. This scientific device was initially conceptualised in the 1950s in Russia and built in several countries in the 1970s. The most powerful of them being built in UK, the Joint European Torus (JET).

In the 1980s the idea of an international project called ITER (International Thermonuclear Experimental Reactor) was proposed by Russia to the USA.

The ITER Members have a shared responsibility to design, build and operate the ITER installation. Following the establishment of the ITER Organisation and a preparatory site, a unanimous decision was made in 2005 whereby the ITER Members chose a site in the South of France suggested by the European Union. 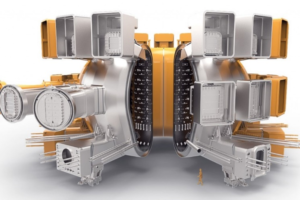 Nowadays multiple initiatives are receiving funding. Some new projects have been launched in the US, in the UK and in China. Plasma is a question of density. To increase plasma density and release more energy than  required in order to initiate the plasma, some compression techniques are combined to magnetic confinement. The future reactor will be more compact, simpler, more stable and cheaper.

THERMOCOAX fully supports FUSION technology. Over the years and through projects like JET, we have accumulated experience and developed specific solutions for the FUSION reactor.

THX can offer solutions such as:

WNE will be coming up mid 2020. We are actively preparing our stand booth to warmely welcome you. While waiting for this great event, let’s share with you our paper on ISO 19443 and Skills & Knowledge Management. We had the pleasure to be part of the nominees’ list for the 2018 WNE award.

In an effort to be ready at the time of the implementation of this new standard, THERMOCOAX puts the emphasis overs the last three years on Skills & Knowledge Management.

How do we put it in practice? Hereafter a brief description of the organization we put in place.

From the beginning (integration of news staff), recruiting process defines clearly what are the responsibilities and Authorities.

Project after project, THERMOCOAX has developed proprietary solutions mainly based on our MI cable technology. To make them available to the engineering staff, Manufacturing skills are identified and listed. Mentoring of the engineering department new comers associated with training “on the field” in all workshop allows a comprehension of technics and their implementation difficulties and limits. An expert senior engineer is made available to ensure a smooth implementation of existing Manufacturing skills and their implementation in new designs. 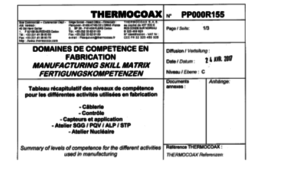 Each COMEX member proposes through a yearly assessment and a CEO approval trainings to managers who in return are doing the same with their N-1.

On a yearly basis and based on specialized questionnaires on individual competencies so that competencies matrix can be updated and training plan defined accordingly. On an individual level, very specific skills and knowledge but also processes are followed individually through internal tolls developed on ACCESS & Excel.

In order to capitalise and materialize THERMOCOAX key Know How, the technical director is in charge of the definition of the core competencies of THERMOCOAX. This document has been initiated at the time of a very specific project where THERMOCOAX took a significant role in the development of a Post Fukushima sensor along with CEA / AREVA/ IRSN ( “Investissement d’avenir “ supported by French Government).

At a technician and operator levels, procedure are made to be directly understood; a picture being far more comprehensible than a long description. Both cumulated they facilitate operators comprehensions.

Under the responsibility of the technical director, it is the duty of the R&D department to anticipate on future requirement in term of Know Why and – through partnership with universities, research institutes (For instance: CNRT for advance material dielectric behaviour, SCK-CEN for In Core simulation related to Neutron sensors) to launch survey on fundamental knowledge on specific topics declared to be strategic and turn them into new technologies. 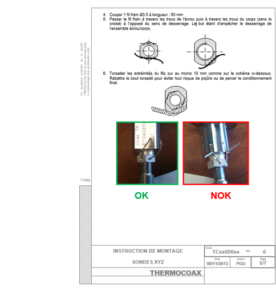 As a recognition of our expertise based on specialized technological components, THERMOCOAX has been entrusted of several Transfer Of Technology (TOT) by reputable companies like AREVA or GE.

The nuclear safety culture is a fundamental part of our training cycle. All the actions launched by the Management demonstrate a firm commitment in this culture so that every individual understands its total responsibility in the nuclear safety. 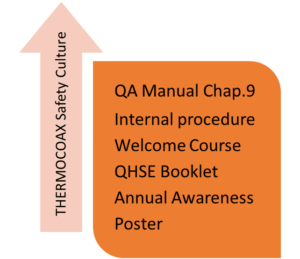 Competitiveness On the basis of our identification of the knowledge and skills of our staff, we have in hand powerful tools to meet the most demanding requirements of our customers. Our methods of qualification of personnel directly related to the matrices of competences demonstrated their efficiency and their completeness. They are a means of effective differentiation for the selection of our company through the demonstration of our mastery of our know-how.

THERMOCOAX is serving the civil nuclear Chinese market for more than 20 years as an authorized exporter for safety related components for nuclear power plant.

We are proud to announce that our HAF 604 certification has been extended by the National Nuclear Safety Administration (NNSA) of People’s Republic of China) till 2022.

This certification initially issued in 2011 has been extended to additional product categories so that THERMOCOAX can now cover a wide range of I&C solutions in term of design and manufacturing of safety related CABLING and SENSORS for InCore and ExCore application. 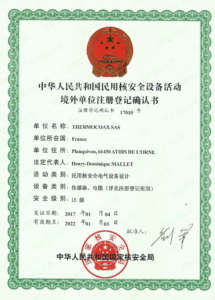 Copy of the HAF 604 certification

Following the FUKUSHIMA disaster, the French government decided to allocate some of its budget  to stimulate R&D in the field of nuclear safety and radiation protection.

A team of reputable Research Institutes, universities and Industrial companies was formed to address the development of a remote monitoring solution able to improve the safety of Nuclear Power Plants and strengthen the third containment barrier in case of a severe accident with a reactor breakthrough and corium release.

Long-length Self Powered Nuclear Detectors have been developed to identify the reactor core debris progression, the erosion of the concrete floor, as well as to monitor the corium cooling.

After multiple simulations and theoretical validations, a complete system (sensors + electronics) has been tested with corium and has demonstrated its technological readiness. 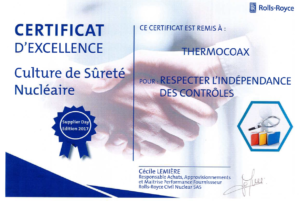 THERMOCOAX was distinguished with a  Safety Culture award from Rolls Royce. In 2019, THX will continue its effort to improve working practices and place safety as a main priority.

At the WNE, THERMOCOAX was nominated for an award in the “Skills & Knowledge Management” category.

In its Quality Assurance Manual, THERMOCOAX takes into account the requirement  presented in the ISO 19443.

“During Rolls Royce Nuclear supplier days” sounds unnatural in English but difficult to amend without knowing meaning of source text. 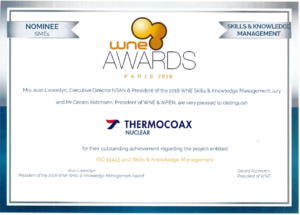 THERMOCOAX has finalized a test campaign on neutron sensors. 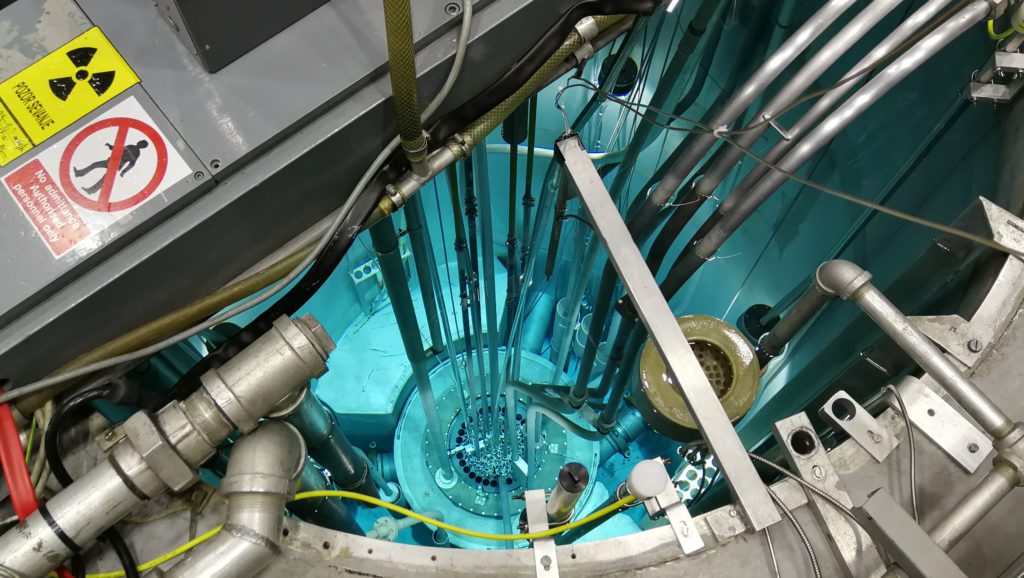 Despite stringent time constraint, a highly professional IJS team was prompt to react and welcome a team conducted by THERMOCOAX and relying on the best internationally recognized experts from different European nuclear organizations.

Multiple irradiation tests have been carried out.

IJS reactor being very well characterized, results are confirmed to match with our stringent expectations: perfect matching between theory and practical results!

An additional demonstration of the THERMOCOAX mature technology readiness.

THERMOCOAX has over 60 years of expertise in instrumentation and heating solutions. It provides solutions in the world of nuclear, aerospace and semicon industries. It design, qualify and manufactures sensors for harsh environment with a focus on nuclear on temperature and radiation measurement.

Over the last decade, THERMOCOAX has developed a range of Ex-Core accident resistant cabling systems and In-Core instrumentation assemblies for Gen 3 reactors.

Based on THERMOCOAX unique expertise and taking profit of the extreme robustness of its MIneral Cable technology, THERMOCOAX has developed, tested and qualified a Reactor Pressure Vessel Level (RPVL) detector.

Before making the detector commercially available, THERMOCOAX has partnered with SIET (www.siet.it) to verify detector functionality at normal and abnormal conditions.

Some results have been published during the latest BEPU 2018 Conference. Click here to read an abstract 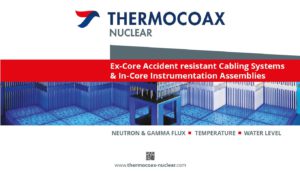 THERMOCOAX, the expert in nuclear cabling systems and instrumentation ,has been awarded a contract by ITER.

THERMOCOAX will manufacture Magnetic Diagnostics Flux Loops Cable Assemblies. This innovative cable assemblies will be based on Mineral Insulated cable technology and will be installed in the ITER Vacuum Vessel.

This project represents an important milestone in THERMOCOAX nuclear business unit expansion and pave the way for others applications in FUSION reactors.

THERMOCOAX offers support to its customers through the design, delivery and support phases of a program.

ITER (“The Way” in Latin) is one of the most ambitious energy projects in the world today. 35 nations are collaborating to build the world’s largest tokamak, a magnetic fusion device that has been designed to prove the feasibility of fusion as a large-scale and carbon-free source of energy.
The heart of a tokamak is its doughnut-shaped vacuum vessel. Inside, under the influence of extreme heat and pressure, gaseous hydrogen fuel becomes a plasma. 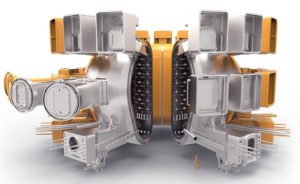 THERMOCOAX received Certificate of excellence from Rolls Royce Civil Nuclear in recognition of efforts placed in the Quality control of signal transmission projects.

THERMOCOAX has demonstrated once again our the ability to reach superior achievements in the demanding Nuclear market. 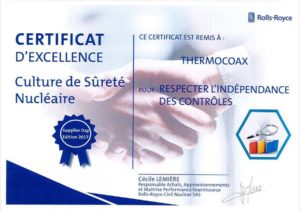 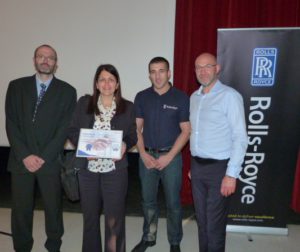 CNPRI and THERMOCOAX have been awarded a contract for early 2017 to provide the InCore Instrumentation of HUALONG reactor (HPR1000).

In continuation of this contract , CNPRI and THERMOCOAX have this week signed a cooperation agreement for the next HUALONG reactors. This agreement is paving the way of future common successes in reactor I&C. 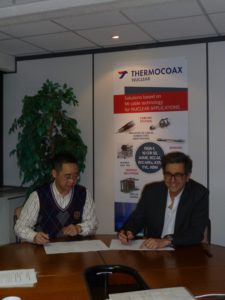 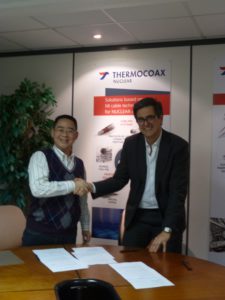 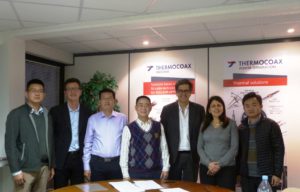